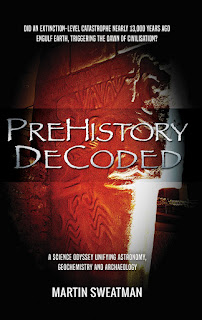 We take a deep dive into genetics and tracing ancestry by way of The Watcher, who knows a lot more about this subject than we do, and thus is better able to explain how no one really knows wtf is going on.

We also read a bit about possible connections between Pictish symbols and images seen at Gobekli Tepe, and also the now-infamous planned mass-incursion into Area 51 by millions of Naruto runners.

We read and discuss several articles detailing new discoveries in human origins, that push back the timeline of the spread of homo sapiens around the world, and their interbreeding and interactions with other hominin species such as Neandertal and Denisovans.
We also read an article about a remote region in Russia that has strange magnetic fields, where compasses and even watches don't function properly, and people often report bizarre sightings and physiological effects.

In the final segment, we talk about physics and cosmology, and how some things just don't seem to add up in the standard model.

We talk about the mystery of civilizing knowledge, esoteric information, and technology being "injected" into cultures around the world from time to time across history. Where does this information come from, really?

We also read our regular spaceweathernews updates and lots of new listener communications.

Brothers of the Serpent Episode 103